Most of us can’t get enough of reality TV – although how much of it is actually “reality” is up for debate. Americans love to see how the “other half” lives, including their triumphs and (especially) their failures. And the Queen of all reality TV shows is no doubt The Real Housewives of Beverly Hills!

On May 2017, popular Beverly Hills Housewife Teddi Mellencamp Arroyave (daughter of rocker John Cougar Mellecamp) announced that she had gotten neck lift surgery. And she even posted Before & After plastic surgery pics on her Instagram Story this month!

Who is Teddi Mellencamp Arroyave?

Teddi Jo Mellencamp Arroyave is an American television personality, actress, and self-titled “accountability coach” (whatever that is). She is probably best known for being the absolutely stunning daughter of heartland rocker John Cougar Mellencamp and his ex-wife the beautiful 80s music-video star Vicky Granucci.

Teddi Mellencamp Arroyave gained fame after appearing in seasons eight, nine, and ten of popular reality TV show The Real Housewives of Beverly Hills – affectionately abbreviated RHOBH. It was here that the public became acquainted with literally every aspect of the beauty’s high-end lifestyle.

Why Did Teddi Mellencamp Arroyave Get Neck Lift Surgery?

This month The Real Housewives of Beverly Hills alum surprised everyone by revealing she had recently had neck lift surgery. Teddi Mellencamp Arroyave’s neck lift came as a surprise to many because she was already absolutely beautiful – and only 41 years old.

In her Instagram Story she opened up about why she underwent her latest cosmetic plastic surgery procedure:

“There’s been one thing that’s consistently bothered me and it’s going to seem like nothing to you guys, but it’s the loose skin on my neck,” she said. “I’ve gone to multiple doctors to see if there are lasers or things like that to help me, and pretty much, there really isn’t anything.”

Teddi went on to explain that she had “tried the strings” (presumably meaning a ‘thread lift’) without any luck. She also stated that she had tried Botox and filler on her jaw, but that injections didn’t deliver the dramatic results she wanted. She felt that “the way that [my] neck is… the only way to do it is just to kind of pull it up.”

Is 41 Too Young for Neck Lift Surgery?

The simple answer is No! Everybody ages at a different rate – so there is no single fixed age that is ideal for plastic surgery. Genetics, gravity, weight gain & loss, and lifestyle all effect the unique way that an individual’s skin, face, and neck ages.

As long as a patient who is undergoing plastic surgery has realistic expectations, good health and is doing this for themselves there’s no “right or wrong” age for a neck lift or other cosmetic surgery procedure.

In Teddi Mellencamp Arroyave’s case, she stated that her neck was “something that has bothered me since I was a young girl,” noting that it has always been a “deep, dark insecurity.” She went on “I have always been comfortable with my neck in the front. It’s the side profile that has always made me feel insecure.”

Neck Lift Surgery Before & After

Following the surgery, Teddi posted pictures of her side profile. “I am still swollen and healing,” she wrote posting her first set of neck lift before and after pictures. And frankly, we are impressed!

While a “double chin” or “sagging neck” may or may not bother each individual person – there is no denying that Teddi’s neck lift surgery gave her a more “classically beautiful” profile!

Ms. Mellencamp Arroyave also indicated that she planned to undergo Morpheu8 radiofrequency microneedling after her surgery to improve and maintain her skin tightening results. 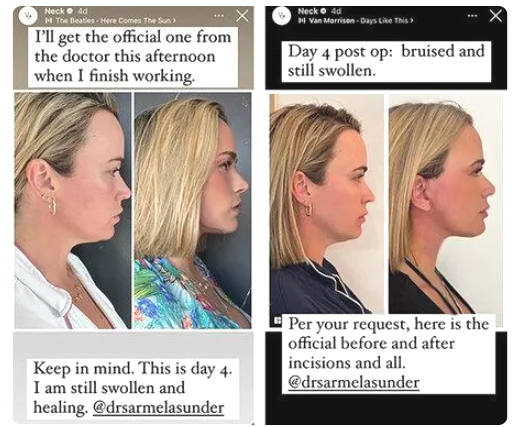 To see before and after photos of Dr. Ali’s Neck Lift patients CLICK HERE.

Board certified plastic surgeon Dr. Ali is one of the only “Beverly Hills Caliber” plastic surgeons in the Birmingham, MI area who offers both neck lift surgery and Morpheus8 RF skin tightening.

If you are dissatisfied with a double, sagging, or drooping neck or chin – at any age – Dr. Ali can help you get RHOB results. He has helped hundreds of women and men get a tight, defined jawline and lifted neck with neck lift surgery, Morpheus8 RF skin tightening, and a wide array of other face, chin, jaw and neck procedures.

And our advanced Vectra 3D imaging system will provide you with a three-dimensional computerized image of your face and neck with expected outcomes before your plastic surgery or aesthetic procedure. So you can decide with treatment is best for you!

Thank you for visiting Dr. Ali’s Plastic Surgery & Med Spa Blog, where we keep you updated on the latest news, events, information & advancements.

Check back often to read about the latest techniques and state-of-the-art technologies in cosmetic surgery, anti-aging, body sculpting and aesthetic treatments.